I primed the canard with Akzo-Nobel 2K gray primer. This is the first part of the primer that Malcolm uses.  Once the primer was dry, I had to locate where the ballast would go. because the wire harness which connects the lights to the ballast is only six feet long, I put the ballast as far outboard as possible. 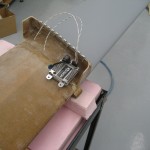 Because the mounting tabs are not flush on the bottom, I would need standoffs. I decided to use wood.  And since I hate using sheet metal screws, I decided to embed nutplates in the wood. 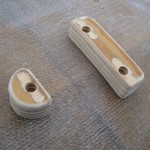 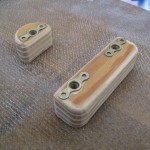 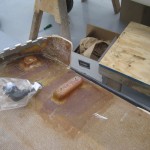 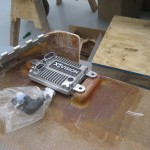 Once that was done, I (of course) had to connect everything and turn some lights on. 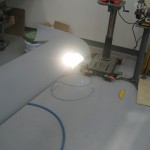 These things are BRIGHT!  But that’s when I discovered the the lens was melting. That light gets REAL hot. So one of my custom made lenses was toast. I called Xevision and talked to one of their engineers and explained what was happening and asked if there was some special material that I should be using. He asked where I was testing the lights and told him that I was doing this in my shop.  In true Adam Savage fashion, he said “There’s your problem”.  He said that outside when the airplane is moving, the air over the lens will keep it cool enough. That seemed unlikely to me so I did a test.  I positioned a small fan about four feet from the other landing light on the slowest setting.  Then I turned on the landing light and with my non-contact thermometer, I monitored the temps. I was seeing 180F on the lens and 110F on the canard. Actually cool enough that the lens didn’t get soft. But not as cool as I would like. 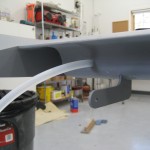 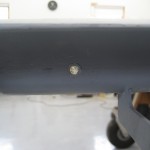 Not sure if it’s needed or will even help. We’ll see.