The upper part of the gear legs (which are inside the fuselage) are supported fore and aft by sockets that they are held captive when the gear is extended. These sockets are made to be perfect fit to the upper gear leg by wrapping the area with duct tape and then applying 3 layers of triax. 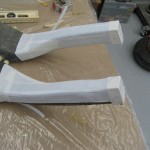 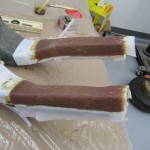 Once cured, they are removed and then trimmed to the rough dimensions.

Currently, the only permanent aspects of the main landing gear are the pivot points which the gear legs pivot at and the over-center linkage which defines the distance between the tops of the two gear legs. So right now the over-center link can move left to right (which in turn lowers one leg while raising the other) about 1 inch. Once the sockets are in there will be no movement at all. So getting that position exact is critical. 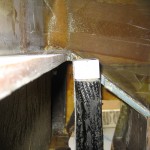 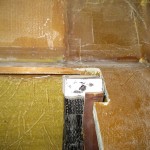 Now the task is getting the two legs perfectly level. So here’s how I did it.

I raised and leveled the airplane, removed the axles from each leg. Then I leveled my laser level and shot the beam through the lower/rear hole in the gear leg. 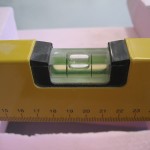 Shooting from the outside at the right gear leg right through the center of the hole. 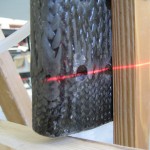 And it’s a little low on the left side. 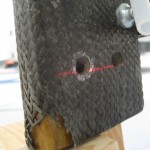 Moving the gear legs a slight amount (lowering the right leg raises the left) and the beam is centered on both holes. Once I determined the method worked, I raised the gear and prepped the transverse and slant bulkheads for bonding in the sockets. 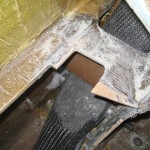 Then the gear sockets are fitted on the gear legs and lowered gear with a penny is inserted into the over-center link. This keeps the upper arms spread slightly beyond where they are when the gear is down. This will prevent the gear from binding in the sockets when it’s lowered. 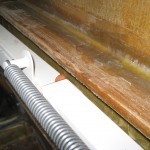 Next I determined the correct position of the gear legs using the laser level and secured the position. Then I used structural adhesive/cabo to bond the sockets to the bulkheads. Once the adhesive has cured, the sockets to bulkhead is reinforced with a radius and BID on all sides. 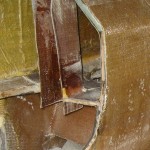 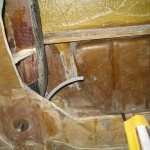 I will do the layups on the bottom when I flip the plane over.