The bottom skin of the strakes are now permanently attached to the spar, fuselage and door.

The cutout for the landing gear has to be made. This allows the gear to raise into the strakes. Basically, the gear leg is raised until it hits the strake. Mark where it hits and trim away part of the strake. The gear will now raise a little further. Keep repeating until the tire hits. Then start cutting out larger pieces until the whole leg and wheel retract into the strake.

Looking under the right strake at the fuselage. 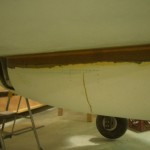 Towards the left edge of the picture, you can see the opening on the side of the fuselage for the main gear leg. You can also (barely) see part of the bottom of the strake where an opening has been made for the gear leg. 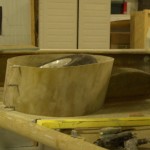 Gear in the up position. The gear leg cover and wheel cover is positioned.

Two things to keep in mind here. One is that fixed gear Velocities can hold a bunch more fuel. And second, I am going to pick up a couple gallons per side with a neat trick. Notice how the wheel is at an angle when it’s fully retracted? Rather than seal that whole area off, I’m going to put an angled “cap” on it and use that space. Should yield about 1.5 to 2 gallons.

Making sure there’s sufficient space all around. 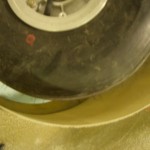 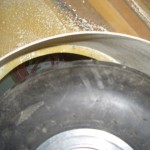 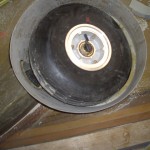 Left side wheel well and gear leg well epoxied in place. Looking from the top (rear). 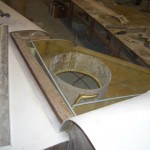 Left side wheel well and gear leg well epoxied in place. Looking from the front. 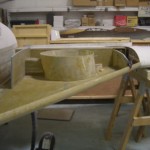 Right side (from front). Landing gear is held up with a piece of wood. 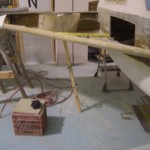 Something else to point out here. Notice on the right side of the picture you can see a rectangular cutout in the side of the fuselage. This is an optional feature that almost every builder does. This is next to where the rear seat is located about elbow height. Basically the side of the fuselage will be moved out creating a space. This space can be used for open storage (no door), closed storage (door) or just a big ol’ armrest area. As an open area or open storage it makes a big difference how big the cabin “feels”.

How far you move this out depends on what you want. If you want a big area for storage, you move it out about 12″. But you lose fuel capacity. Don’t make the cutout and you pickup about 5 – 7 gallons. I decided to split the difference. Mine will be moved out about 5 1/2″. I’ll lose a little fuel but gain some space. I toyed with the idea of making it angle in at the top but decided that would just add work with not much gain.

The location of the wheel and gear leg well get transferred to the top strake skin. Also the fuel cap is installed. 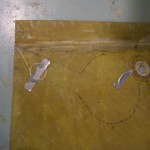 I’m doing two things different here. Number one: I’m not using the fuel cap from the factory. I looked at them but didn’t like the design and construction. I found a company that makes the fuel caps for race cars and bought a couple of those.