Inside of the plane looking at the right side. The rectangular opening is the area that extends into the strake. The plans say make it 11 inches deep but mine is only about 5 inches. 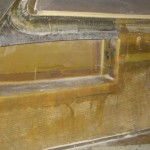 Another modification. As you have seen, when the landing gear is retracted, the wheel is at an angle. To allow it to retract further, a “divot” is cut into the inside of the top skin of the strake. Then it is covered with two layers of BID.

It’s kind of hard to see it in this picture, but the lighter colored area is the divot. 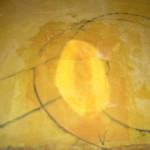 The inside of the top skins coated with Jeffco . You can see the area of the wheel well that won’t be holding any fuel and the divot is a little easier to see. 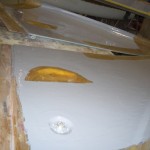 The inside of the top skin has to be sanded where it will adhere to the bottom strake and ribs.

Here’s the inside of the top skin after sanding. 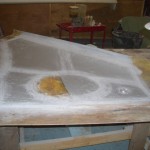 Finally it’s time to bond the top strake skin on. An epoxy/cabosil mix is applied to the top of the outside edge and ribs.

Strakes ready for the top. 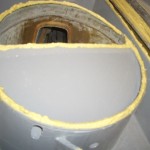 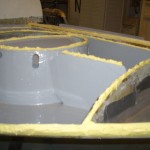 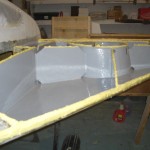 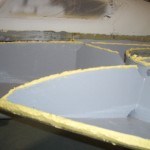 Once the top is on, everything is weighted down to hold it in place. 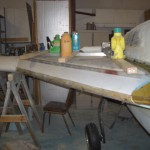 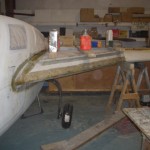 After everything has cured, it’s time to test for leaks. Since how well the fuel caps seal is an unknown, they’re covered with plastic and taped. 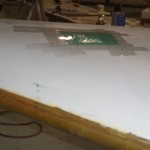 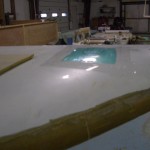 Many builders attach a pressure gauge to one of the fittings and then pump some air in the tank and monitor the pressure overnight. Tom has a slightly different approach.

He uses an altimeter which is connected to a fuel fitting. The a vacuum pump is used to create negative pressure in the tank until the altimeter reads 1,000 feet. Then everything is left overnight. If there are no leaks, the next morning the altimeter will still read 1,000 feet. If it reads zero, then there’s a leak. 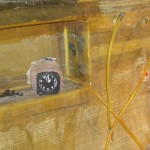 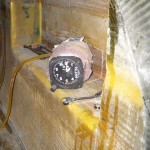 Everything is done and now the airplane comes home!

A word or two on the idea of getting outside help.  As I mentioned before, the strakes become a structural part of the airframe.  It’s what keeps the center spar from twisting.  As such, doing it right is absolutely critical. In addition, to that, even after doing everything just right, there can be leaks.  There are “tricks” that are used to find and fix these leaks.  And finally, manpower.  I am building 100% solo.  I have zero help. As a result, I have had to come up with some inventive solutions building so far. But with strakes, there are a couple of situations where quite literally, the more people the better.  I just don’t have access to that resource. So those are just three of the things that resulted in me getting some outside help.

At the end of all this, it took a little less than 3 months start-to-finish.  It would have been less had I been able to get to PA more often. At the end of the process, I’m very happy with the results.  But even with the very experienced help of Tom Wright, there are a few things that if I had to do it again, I would have done differently. For example, I would have 1) Slanted the baggage opening of the strake cutout in at the top. This would have resulted in more fuel capacity without a loss of much usable space. 2) Really lowered the gear leg tunnel to maximize the fuel capacity. 3) Made the fuel caps flush and moved them inboard a bit. And there probably more. I can’t imagine how long this would have taken had I tried to do it solo.

Thanks for the help Tom!