Once it started warming up, I was able to install the hundreds of feet of conduit for the electrical. Interesting thing about where we live; even residential structures are required to have conduit. Which means no Romex. I could have wired the entire garage in a weekend. But because of the conduit, it took me a couple of weeks. That said, I really LIKE having the electrical in conduit. If you ever need to run a new circuit, all you need to do is push a couple wires through the conduit and you’re all set. And you don’t have to worry about grounding wires. Once the conduit was done, the insulation went in. I wanted a well insulated structure so I have 6″ of insulation in the walls and up to 18″ in the ceiling.

Because of the delay (and because I ABSOLUTELY HATE mudding drywall), I decided to contract the drywall work out. The drywall crew had the sheetrock up, taped, mudded and sanded in less than 4 days. It would have taken me a month to do that. They also agreed to leave  their scaffolding behind for a couple of days to I could paint, install the lights and ceiling fans.

Here, I’m preparing one of the SIXTEEN fluorescent light fixtures. 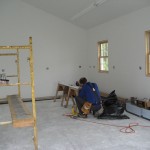 I’m really glad I got the drywall crew to leave the scaffolding. It was a bit unnerving installing 8-foot light fixtures while standing on wobbly scaffolding 12 feet up by myself. I don’t even want to think about doing it without the scaffolding.

This is a picture that I took just after I returned the scaffolding. 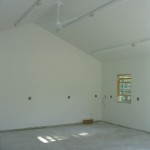 The small wood box in the corner is the manifold for the radiant heat water tubing (boiler and pump aren’t in yet). Also notice the quad outlet boxes (gray) every 6 feet. I have read, and agree, that you can never have too many outlets. Each wall is on a separate circuit. It is also said that you can never have too much light. Hence the four rows of 6000K/94CRI fluorescent lights. (basically that means bright and white!)

I wanted a floor that would be easy to clean and would also make it easy to find any small screws or parts. I went with a 2-part epoxy designed for garage/hangar floors. It’s a real pain to apply. You have to acid etch the concrete, then neutralize it, then rinse it. Oh and don’t forget the walls are finished so I had to cover the bottom four feet of the wall so as not to damage it with the acid/neutralizer/water. Then once the paint is mixed it has the consistency of honey. So spreading it is a challenge. And since it’s an epoxy, you have a limited time to get it down. Oh yeah, you also have to apply two coats. But once it’s down, it looks real nice… Except that it makes imperfections in the concrete very apparent. In the upcoming pictures, you’ll notice it’s very shiny.

The garage door was another area I obsessed over. I went with an 8 foot high door instead of the typical 7 foot door. Then there was the issue of heat loss. 128 square feet is a lot of potential heat loss. So I got the highest R-value door I could find (R-10). I figure if I lose too much heat through the door, I’ll build a temporary wall out of 3-inch foam in front of the door. The other problem with a garage door is the rails that the door follows when you open it. The horizontal portion is typically the same height as the door opening. In a normal garage, this is fine. But the ceiling at the rails in this shop is going to be about 11 feet high. That’s three feet of wasted headroom. So I got a larger radius curve for the vertical to horizontal transition that put the rails just below the ceiling. No wasted headroom now.

This is about halfway through installing the door. 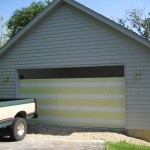 The last garage door I installed was in 1982 and I didn’t remember much so this was all new. 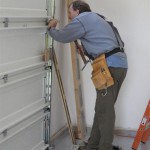 The moment of truth. Just a slight lift and it effortlessly rolled open! I love it when plan comes together. 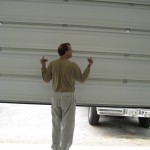 Once the door was in, it was move it day. Some of my tools hadn’t been touched since I moved them into the existing garage back in 1999.

Along the back wall are all my stationary tools (tablesaw, drillpress, radial arm saw etc.). Because space may get a bit tight, I’ve got all my tools on mobile bases that will allow me to move them around when needed. In fact, just about everything in the shop is on wheels. Don’t forget to notice the nice shiny floor! 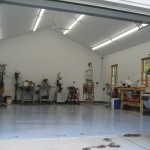 Here’s the heating system. Flash boiler on top, the control unit, pump and expansion tank in the middle and and the manifold in the wooden box on the bottom. The flash boiler is really amazing. These are becoming more and more common in houses instead of traditional tank-style water heaters. Instead of heating 50 gallons of water and keeping it hot all day, whether it’s needed or not. These flash boiler (also called “tankless water heaters”) instantly heat the water on demand. The initial numbers are encouraging. It looks like it’s going to be less than $10 per month to heat the shop. 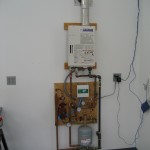 Finally some finish pictures. This is after landscaping. 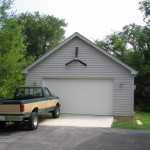 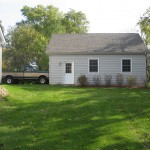 Yes, that’s a propeller over the door. Since I’ll be building an airplane here, it seems appropriate. Besides, there’s a story behind this particular propeller. 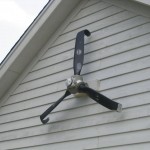 Once the shop was finished, we (both of us this time) made the trek down to Sebastian to visit the factory, see the latest model and take a test flight.

After a tour of the factory and where all the parts a manufactured, we visited the Builder Assistance Center. This is where people can build and work on their Velocities. We will be taking advantage of this facility to do what’s know as the Head Start program. I’ll spend about a month starting the build process. Then we’ll transport the airplane home and finish it.

Takeoff in the factory demo plane. 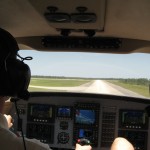 Me at the controls. 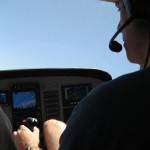 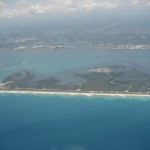 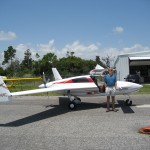 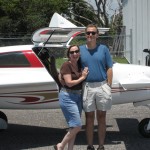 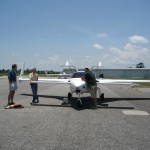 Aircraft that are built in a non-production environment are certified by the FAA as experimental. This applies to all aircraft. Whether it’s the first couple of Cessna 172’s or the Boeing 747. Initially, all aircraft are designated “experimental”. It’s not until the aircraft, the manufacturing process and every other aspect of the aircraft has been evaluated that the “experimental” certification is removed. Until then, the aircraft must have the word “EXPERIMENTAL” plainly visible. There are also a number of other labels and notices that must be present.

Here’s a picture of what Cessna is currently calling the NGP (Next Generation Piston). 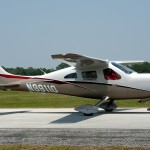 Notice the lettering under the window? Once Cessna has satisfied the FAA that the that the airplane can fly (predictably) and the manufacturing process is such that every aircraft that comes out of the factory will behave identically, then they will be allowed to remove the “experimental” label and related notices. Then the airplane becomes what we refer to as a “production” airplane. Homebuilt aircraft are never able to achieve production certification because they are all built by different individuals. Each one is a little bit different. Some types of homebuilt aircraft have gone on to obtain production certification. The Cirrus and Lancair, for example. The companies that originally built the components for homebuilders decided to go through the process and obtain production certification. You can now buy these airplanes the same as you would a Cessna, Piper, Mooney or Beech. When Lancair decided to come out with a production model, they changed the name to Columbia. In the fall of 2007, Cessna purchased Columbia Aircraft.

I mention all of this because Ann just had to take a picture of one of the required placards which are required for aircraft operating under the experimental certification. 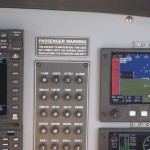 Afterwards, we spent a couple days just hanging around the Flordia coast.

View from the motel room. 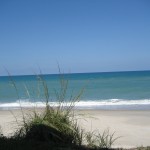 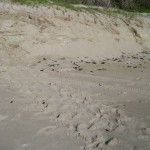 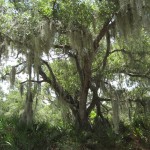 I mailed the purchase agreement and deposit to Velocity. 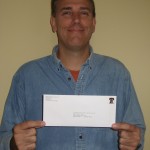 Velocity will begin building the wings soon. Instead of traditional antennas for the communications and navigation radios, Velocities use an antenna that is embedded into the wing itself. A wire is then run from the antennas in the wing to the inboard part of the wing where it connects to fuselage. The standard wire for this is RG58 which is similar to what is used for older Ethernet networks. I discovered that RG400 has much better characteristics in this application. It does cost quite a bit more but since it can’t be replaced once the wing is built, I decided it was a good modification. After discussing this with the folks a Velocity they agreed to install RG400 cable so I ordered enough and had it shipped down.

Originally, when I was planning my month-long stay in Sebastian, I got a nice rate (for Florida in the winter) from the folks at the Davis House Inn. But that was when I thought that I was going to be starting in December. Unfortunately, January and February are more popular so the rate is higher. Oh well, that’ll teach me to procrastinate. So now the plan is to start work on the 14th of January. I’ll stay for three weeks until 2nd of February then come home to teach a class the first week of February. At this time, I don’t know if I’ll go back after teaching and work on the plane in Florida or just ship it home. I’ll have to see how far I get and how comfortable I am with the work required.

Instead of flying myself down, I decided to use some of my frequent flyer miles and let American Airlines get me to Sebastian.

I had the factory add a duct (or conduit) in the canard so I can install landing/recognition lights in the canard.

My brother is in Sebastian! He’s even staying at the Davis House Inn. Unfortunately, he’ll be done with his business down there a couple weeks before I get there. For a while, it looked like we’d be down around the same time.