Packing for the trip. The weather will be all over the place. There were even reports of snow nearby. So I’m bringing clothes for warm and not-so-warm. My brother is done with his job in Florida but he’s extending his stay a couple days so we can see each other.

I arrived in Sebastian at about 1:30am on Monday morning. A late flight on Sunday was all I could get. And after the drive from Orlando…

My accommodations for the next tree weeks are the Davis House Inn. It’s kind of a B&B without the breakfast. Small but cozy. 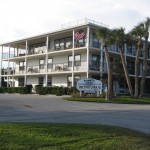 Monday morning at 9am I was at the Velocity office. After introductions I went out to the shop and saw the plane (or what would become the plane) for the first time.

View from the front (Left side). 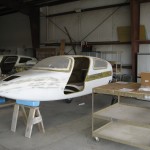 View from the front (Right side) 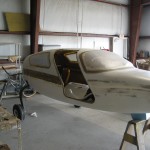 Looking in the back from the right door. The doors have been removed and you can see one inside on the floor. In the back you can see some of the main landing gear retract mechanism. 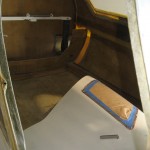 Looking inside to the front from the right door. Once again, you can see parts of the doors and the wheel from the front landing gear. All the windows are covered to protect them from being scratched during construction. 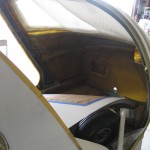 I was introduced to Rick. He would be one of my guides in getting started on this whole project. 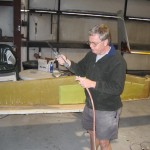 I started by doing an inventory of the parts. There are a couple hundred little bags with screws, nuts, bolts, and various other parts that I need to confirm are all there. This took over an hour.

The first actual build task is to cutout and remove “the doghouse”. The canard (front wing) is mounted in the nose of the aircraft. A part of the fuselage has to be cut out to allow placement of the canard. This piece that is removed is called (for some reason) the doghouse. First, the location of the canard has to be identified. This is accomplished by measuring from specific locations and marking where the canard will be.

Marking the canard location on the right side. The hole is drilled to help locate the position. 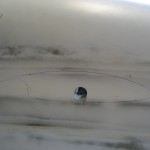 Once the canard position is marked, then lines are created using masking tape as a cutting guide. 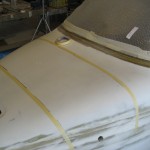 The result after cutting the doghouse out. 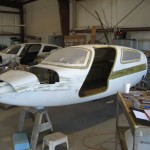 In addition to cutting out the doghouse, I also had to cut out access ports in the keel and put in hardpoints for controls. The keel runs the length on the cabin and is between the left and right seats and the control stick is mounted in the keel.

It’s hard to visualize it, but this is the keel (upside down). The round opening wasn’t there this morning. One of the upcoming tasks is to build a cover. The opening will allow access to the control linkage. 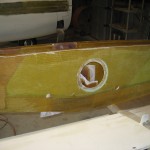 An opening is also cut in the top of the keel towards the back.  Because this opening is at the top and rather large, a stiffener is bonded and riveted in place. 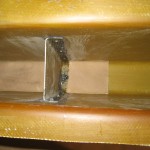 In a slow-build construction where the two fuselage halves are not assembled, the keel is dropped into position once all the modifications are made to the keel.  But with a fast-build, that’s a bit tricky since the keel won’t fit in through the door opening. So it has to be cut into two sections. Once cut, a flange is made which allows it to be reassembled. 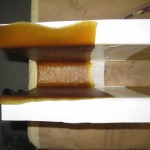 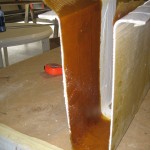 In order to to mount controls to the keel, it is necessary to attach hardpoints to the fiberglass. This creates a strong mounting structure. In this case the hardpoints are created by mounting plywood to the keel and covering it with four layers of fiberglass cloth and epoxy.

Here are two of the hardpoints inside the keel. The white material is a dacron fabric that will be removed once the epoxy cures. 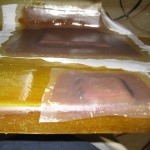 Another view of one of the hardpoints. 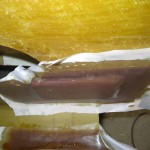 This morning, I started on engine cooling. In a conventional airplane (with the engine in front), there are openings at the front to allow ram air into the engine compartment to cool the engine. Since aircraft engines are air cooled, this is very important. Because the Velocity has a rear mounted engine, cooling is a challenge. The early Velocities used a pair of scoops on top of the fuselage just forward of the engine compartment. The scoops were similar to the hood scoops that you used to see on some high performance cars. The problem with scoops is that they aren’t very efficient and since they protrude into the airstream, they cause drag.

So instead of air scoops, we will use NACA Ducts. NACA (National Advisory Committee for Aeronautics) was the precursor of NASA. They discovered that if you create a recessed opening with the right shape, you can get more air with no drag.

So my first task was to cut out the two openings for the NACA ducts to the engine compartment and one for fresh air to the cabin.

From the back looking towards the front at the top of the fuselage. You can see where the two large ducts will be. There’s also a smaller fresh air duct in the middle. The tan colored area is the rear of the fuselage (also know as the firewall) where the engine will be mounted. I’ve also marked the openings in the firewall for the ducts. 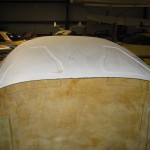 Here, I’ve cut out the engine cooling ducts on top of the fuselage. At this point, I haven’t done the fresh air duct or the firewall openings (although they are marked). 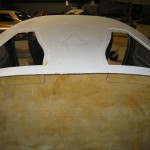 After cutting the small NACA duct and the firewall openings, I prepared the surfaces mounted all three ducts with structural epoxy.

One of the things I’ve got be better at is taking pictures. When I get rolling on a task, I forget to pull the camera out and take pictures. This is why there are no pictures of the installed ducts and flight controls in the keel.

This morning I installed the two engine cooling NACA ducts and the fresh air duct.
http://www.velocity-xl.com/pictures/2008/IMG_5734.JPG

The installed ducts held in place with structural epoxy. 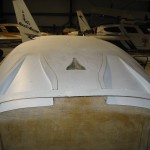 Inside view of the three ducts. 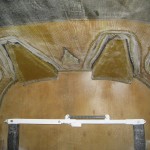 Next I mounted the four hinges to the two elevators. The elevators are mounted at the rear of the canard. When the control stick is pulled back, the elevators are deflected down which increases lift at the canard (airplane goes up).

Two holes are drilled in the hinge. Then structural epoxy is applied to the hinge and it’s riveted to the elevator. Finally, another hole is drilled between the two rivets and a screw and nut are used to further hold it in place.

This is the area of the elevator that the hinge gets attached to.  I’ve already sanded the primer and filler away from the carbon fiber and drilled the holes for the rivets. 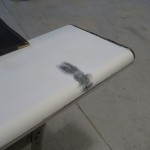 This is one of the hinge brackets riveted, glued and screwed in place. 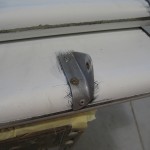 Here are both elevators with the four hinge brackets on each elevator. 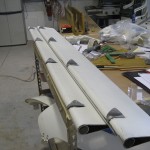