One of the things I was planning on when I started building was to install electronic ignition.

The spark on aircraft piston engines is provided by a magneto. This is similar to the distributor on an (older) car engine.  The difference is that a magneto is effectively self powered. It generates the spark without any outside power required. That’s why an airplane engine can run even if the master power switch is turned off.

There are two magnetos which are connected to two spark plugs for each cylinder. There are two reasons for this: 1) redundancy and 2) two sparks burn the fuel mixture better than one.

There is also a big drawback to magnetos.  They don’t advance as the engine turns faster. Even car distributors did this. As a result, the timing on a magneto is a bit of a compromise. It’s set so provide adequate spark across the RPM range of the engine.

Electronic ignitions require power to generate the spark.  But they can create multiple sparks when they fire which burns the fuel even more completely.  And they will advance the timing as the engine turn faster.

At the time I started building, electronic ignitions were complicated affairs with multiple boxes and wires and required external power.  I didn’t like that so I was going to go with standard magnetos.  Then I heard about G3i.  This was a really interesting concept.  It used an external box and controlled the spark.  But it used the existing magneto.  Which means, if the box lost power or failed outright, then the magneto would continue operating in legacy mode. The only problem was it was only available in a 12v version. So I made provisions for one in my electrical system design, but waited to see if they would come out with a 24v version.

At the 2016 Sun-N-Fun I stopped at the E-Mag booth.  They had an electronic ignition which was literally a drop in replacement for the magneto. No external boxes!  And… It did not require external power.  It had an integrated generator.  Well sign me up! The owner of the company said that they were currently working on certification. I said I have an experimental aircraft. He said that he could get me one real soon and would appreciate feedback.  I said “no problem”. He said that should be able to get one of his “Non-certified” units in a couple of months.  “Great” I thought.

About a month later, I sent him an email and was told they are focusing on getting certification.  I said I didn’t need a certified unit and he said that they didn’t have anymore non-certified units but that I’m on the list and it should be just another month.  Over the next two years, I would check in and be told “couple months”.

To date, they still aren’t shipping a unit for a 6-cylinder Continental.

At Oshkosh that same year I stopped by the SureFly booth and talked to the owner, Jason Hutchison.  Basically the only difference between his ignition and E-Mag was that he didn’t have a generator integrated in his.  It required a 10amp circuit.  Okay, I can live with that. And it was about the same price as the E-Mag. But I wouldn’t be able to use my existing wiring harness.  He said they would be shipping in… wait for it… a couple months. He gave me his card with his personal cell phone number on the back.

I told him that whoever called me first would get my business. Over the next 14 months whenever I called he said that he was running behind because of whatever.  But he always told me what was holding him up.  And he was very forthcoming.

In December of this year, I received my SureFly SIM6C.

Then I had to get an ignition harness. I had no idea how much one would cost.  I figured a couple hundred.  Turned out to be closer to six hundred. 🙁

But that was for a complete harness (both magnetos).  So if anyone want a right magneto Slick ignition harness for a Continental 6-cylinder, let me know, it’s yours for $300 with free shipping!

I built the airplane but I purchased the engine. Whenever I do anything serious on the engine, I like to have someone that knows engines to work with.  My old A&P/IA from up in Chicago has semi-retired and now spends his time raising cattle and working on airplanes in Tennessee. I told him what I was planning on doing and asked if he would help and he said “Come on up!”.  And up I went.

Pictures of the Bendix magnetos: 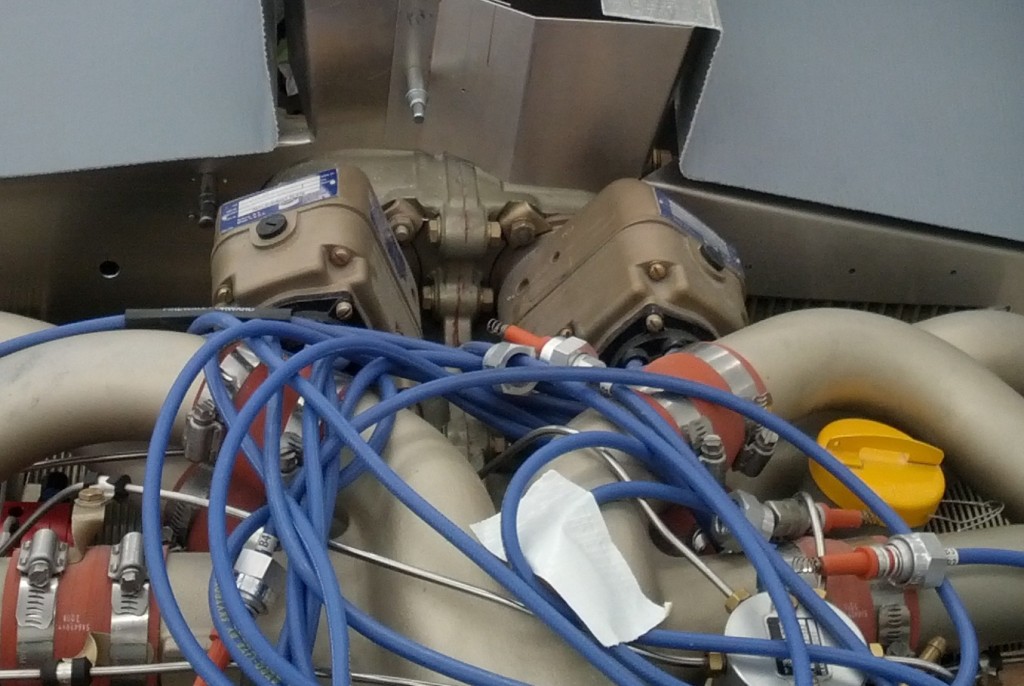 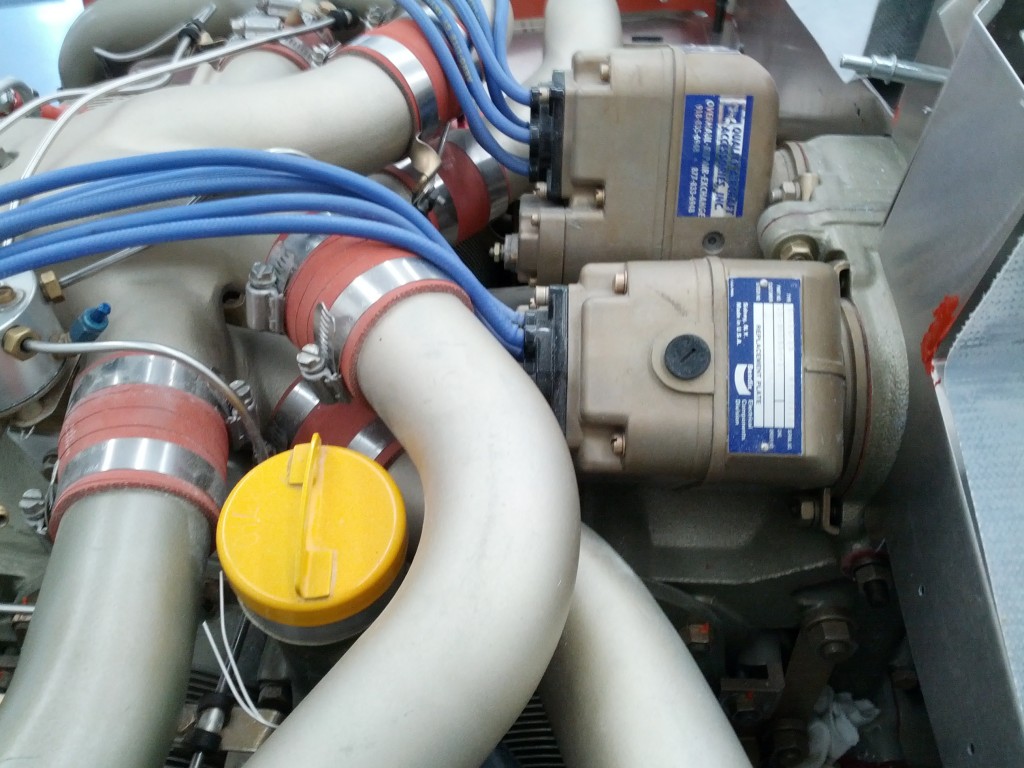 I flew up on Friday morning and at 8:30am we started pulling the old left mag (technically it’s the right mag because the engine is on backwards).  That’s when we started finding pieces of aluminum sheet.  It took me a minute before the light bulb went off in my noggin’ and I looked at the intake ducts on the upper cowling.  To kept the cylinder head temps even, I built a “diverter” to direct the incoming air down onto the cylinders. 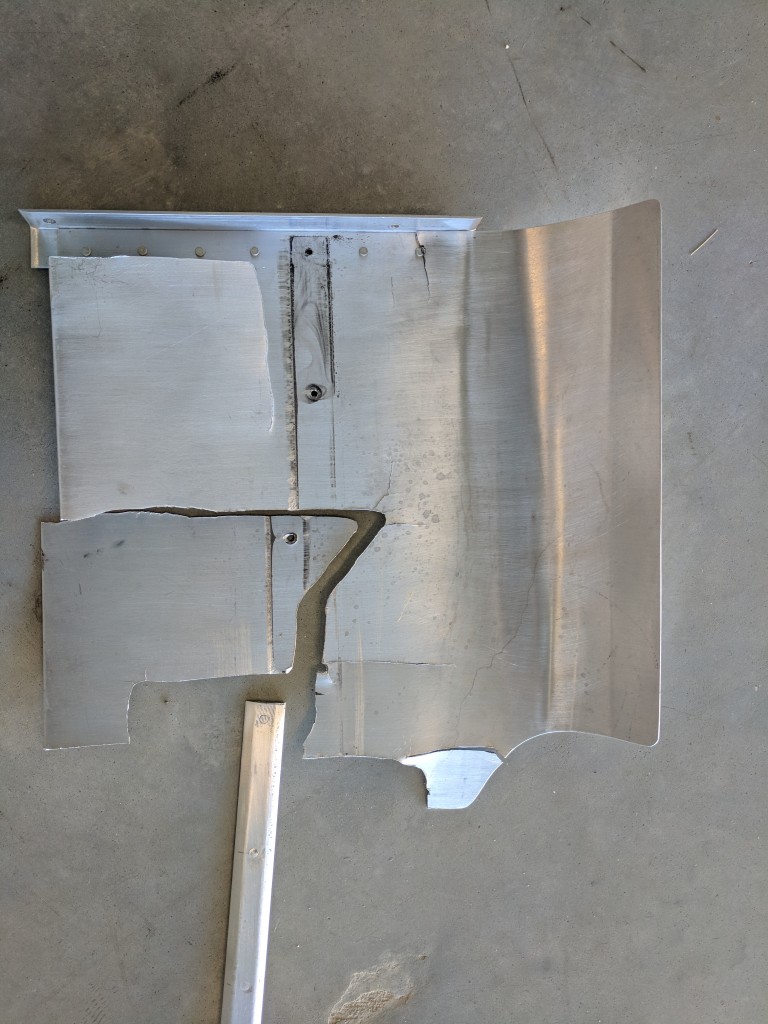 It seems the vibration caused it to crack and come apart. So I removed what was left and then we installed the new electronic mag. When it was time to set the timing, Lynn said “we need to find the correct engine position”.  I said, “no problem, I’ve got it marked on the prop flange.” But the new mag wouldn’t fit in that orientation. So we had to re-clock the gear about 20 degrees so it would fit. 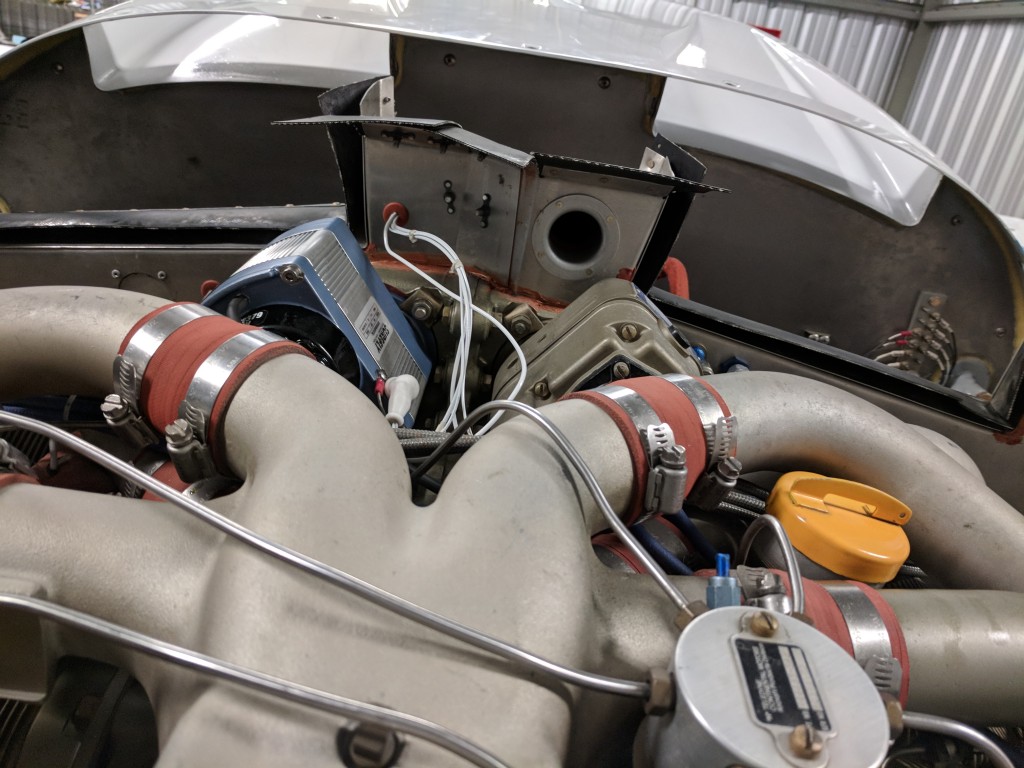 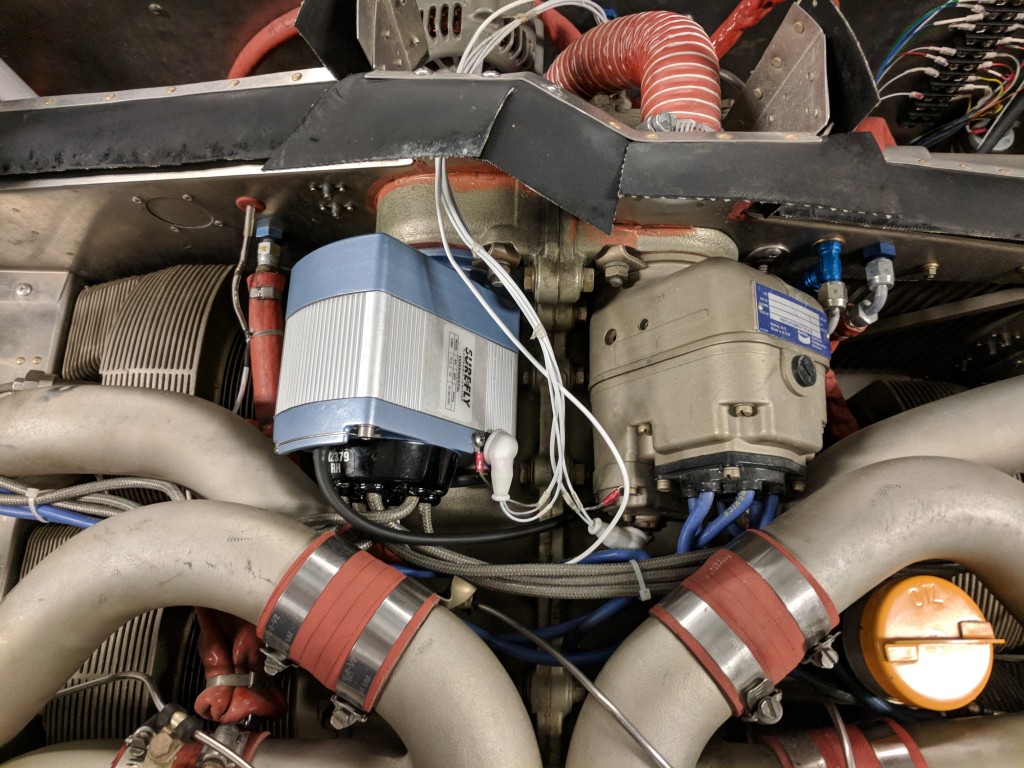 The company that did my fuel system adjustments last spring had it all screwed up. So Lynn broke out his gauges and we set the fuel injection system pressures as well.

Once that was done, he hopped in the co-pilot seat and said “Let’s go!”.  You gotta love an A&P who’s not afraid to ride in a plane he just worked on.  🙂

We took off and started climbing. At about 1,000′ the CHT alarms started going off.  It’s amazing how much that diverter helped. I was having a hell of time keeping a couple of the CHT’s below 410. It was very bumpy so we returned to the airport. Once on the ground he asked if I wanted to go to lunch.  I said that I wasn’t comfortable with the CHT’s and that it was probably best if I took off now just in case I had to return.

So off I went.  I made it about 7 miles when I decided to turn around. I had one cylinder that had gone over 420 degrees! When I landed, Lynn asked what I wanted to do.  I said that I had been flying over two years without the diverter so I knew that I could keep the CHT’s under 400 (barely) without it. So that’s not the problem.  My fuel pressures and flow had been too low before he adjusted them, so that’s not it.  Which means it has to be this electronic ignition. So I said that we’re going to have to put the old mag back in.  He agreed.

So off comes the cowling.  I get started on disconnecting the ignition harness while he starts removing the mag.  He mentions that we’re going to have set the timing on the old mag.  I once again say that shouldn’t be a problem since I’ve already got the mark on the prop flange. He comes to a dead stop…  “What?” I ask.

He said “I thought you said that mark was for the new mag?”  I said “Yeah. It’s for setting the timing of the mag.” And then I get “the look”. You know the look.  When you think you know what you’re talking about but you really don’t?  THAT look.

He said “Don, the timing of you Bendix mags is at 22 degree BTC. You told me this new mag is supposed to be timed at top dead center.”  He continued:  “That would explain why the CHT’s were so high. And why we had to reclock the timing gear 20 degrees.”

To say I felt like a idiot would be an understatement.  But that right there is why I like to have someone who knows what they’re doing when I do engine work.

We re-clocked the mag gear, re-installed and re-timed the new mag.  Started up the engine and it ran fine (but it ran okay before so that’s not conclusive). Put the cowlings back on, loaded up and took off again.

This time the CHT’s for the hottest cylinders only sneaked over 410 and I easily got them back down under 400.

On the trip home at 7,500′ (500′ lower than the trip up) with the same OAT, I was indicating about the exact same airspeed (I was hoping for a little improvement) but my fuel burn was .5 GPH lower. I’ve only made one other trip so I’m still gathering data on performance.  After a couple more trips I should be to determine what improvements to expect.

When I got back home, I thought about how to make a diverter that wouldn’t crack again. I still have some titanium left over so I decided to try that.  It took a quite a bit of work to get the roll in the back but eventually made it. Hopefully, this one will last a little bit longer. 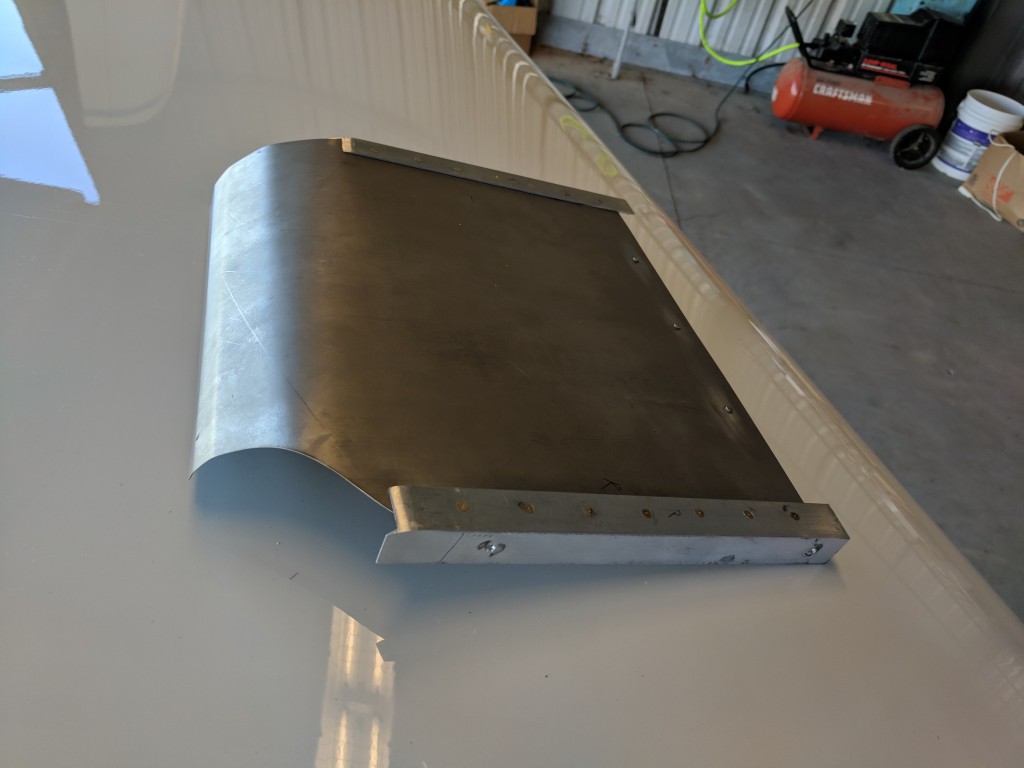 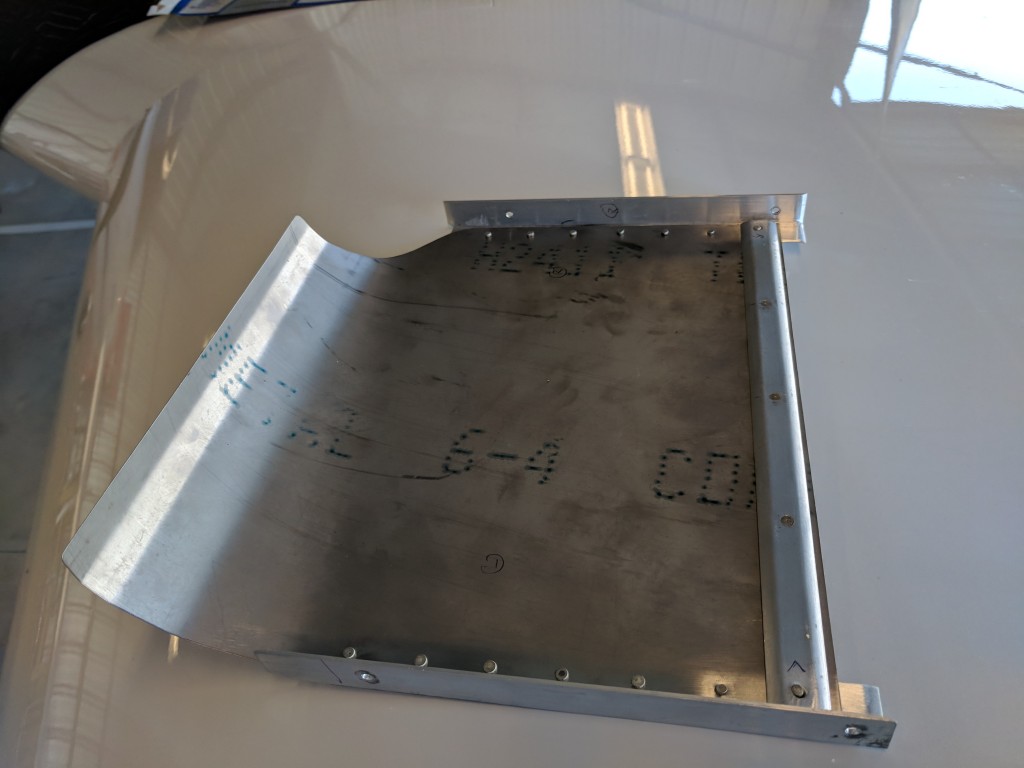